CASE 01 – The Audio Case for Raspberry Pi and HATs

Today, many people are enjoying audio by Raspberry Pi. How to enjoy listening to the music will differ from person to person, some people are connecting with USB DAC, and others are having an expansion board(HATs). However, if you are an audio phile, the goal is the same, sound quality.

The audio system using Raspberry Pi has advantages not only in terms of electronic hobby, but also that can communicate with DAC from CPU directly via I2S. Since software can be updated simply by replacing microSD or USB-memory, the enhancement of function is easy and it is hard to become obsolete. 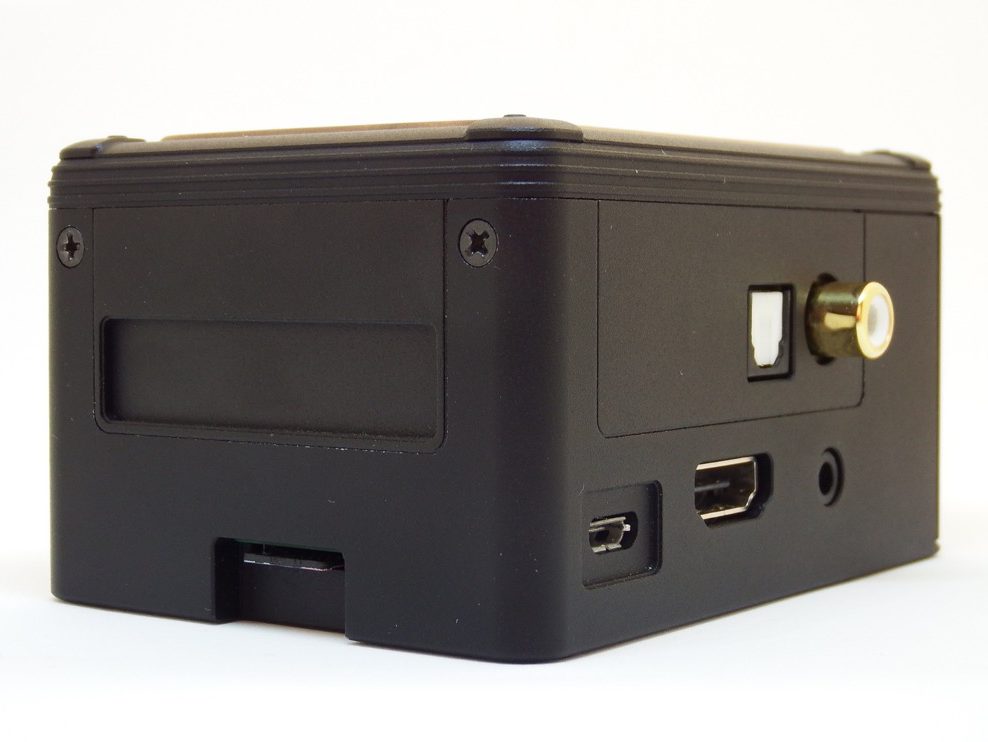 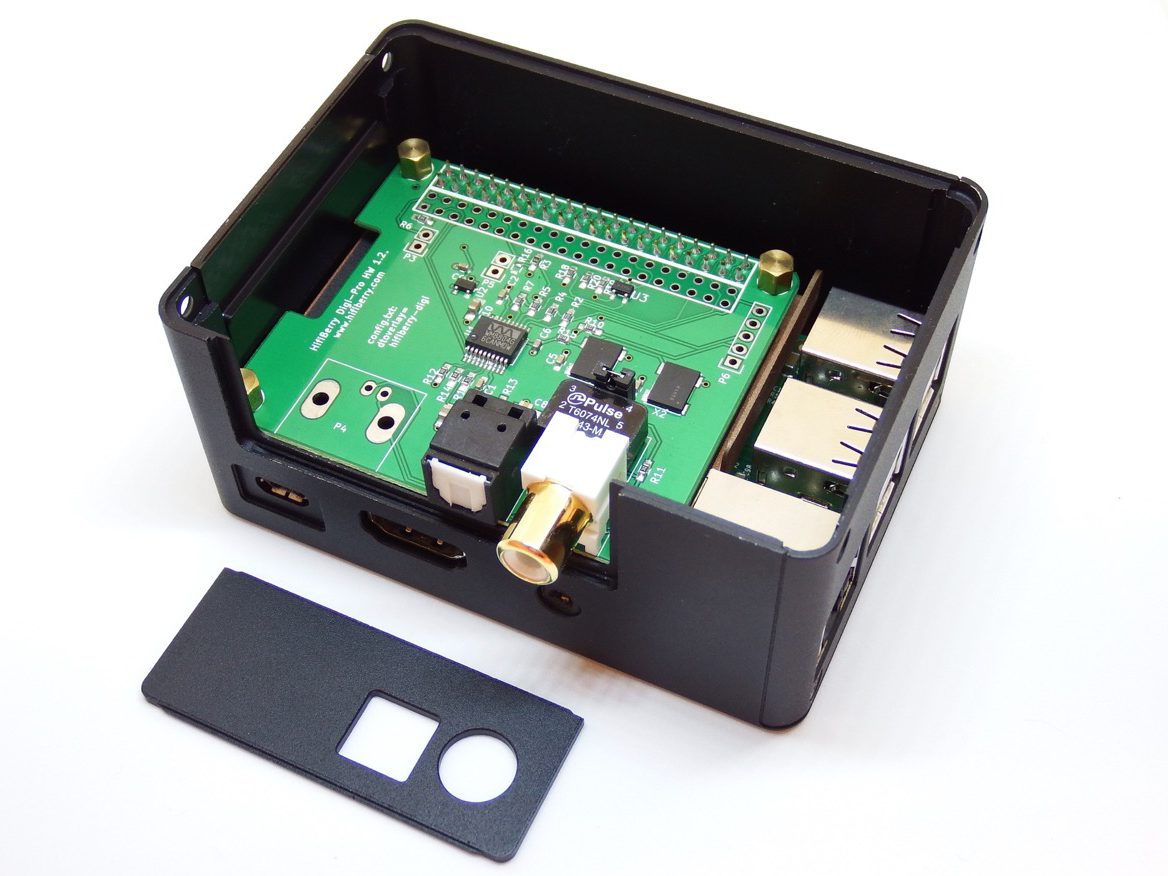 But, there is something that’s been bothering us. Its name is “CASE”. Since Raspberry Pi is sold in state of bare board, dust is easy to pile up without a case, there is even a risk of short circuit. When using HATs, position and number of PINs vary from product to product, so we must to replace entire case when change HATs. Despite the structure that can change function by replacing HATs, we have a dilemma that we can not do so.

The audio-case for Raspberry Pi “CASE 01” was developed under such a background.
It has a large opening over the microSD card slot (front part), and the USB Micro-B / HDMI terminal (side part), and can fit the panel designed according to HATs into it. For audio systems that dislikes electromagnetic noise, the case is preferably made of metal rather than plastic, but metal is high in manufacturing cost. But, if you can replace the panel of PINs part, you can use one case with multiple HATs.

For long and continued use, we had refined CASE 01 to the nines from materials to finished products in every detail. The bottom (development code : bathtub) that fixes the Raspberry Pi is made of aluminum, and it is also scraped out. The surface was satin finished with matte black anodized aluminum, aimed at a compact yet durable appearance. The weight of CASE 01 is 170g, its thickest part is 3mm, it is on the edge of massive feeling and portability.

In CASE 01, Raspberry Pi is fixed in the bathtub using specially designed parts. The rear panel covering USB port and Ethernet port adopts a detachable structure, the stereo mini plug and HDMI, and the USB Micro-B plug also fits smoothly in a predetermined position. Although it seems to be unimportant at first glance, it was carefully designed using 3D modeling software and tested by 3D printer repeatedly. This is because it is necessary to open the hole for such plugs, assuming that the installation position of the Raspberry Pi will be slightly shifted by user. 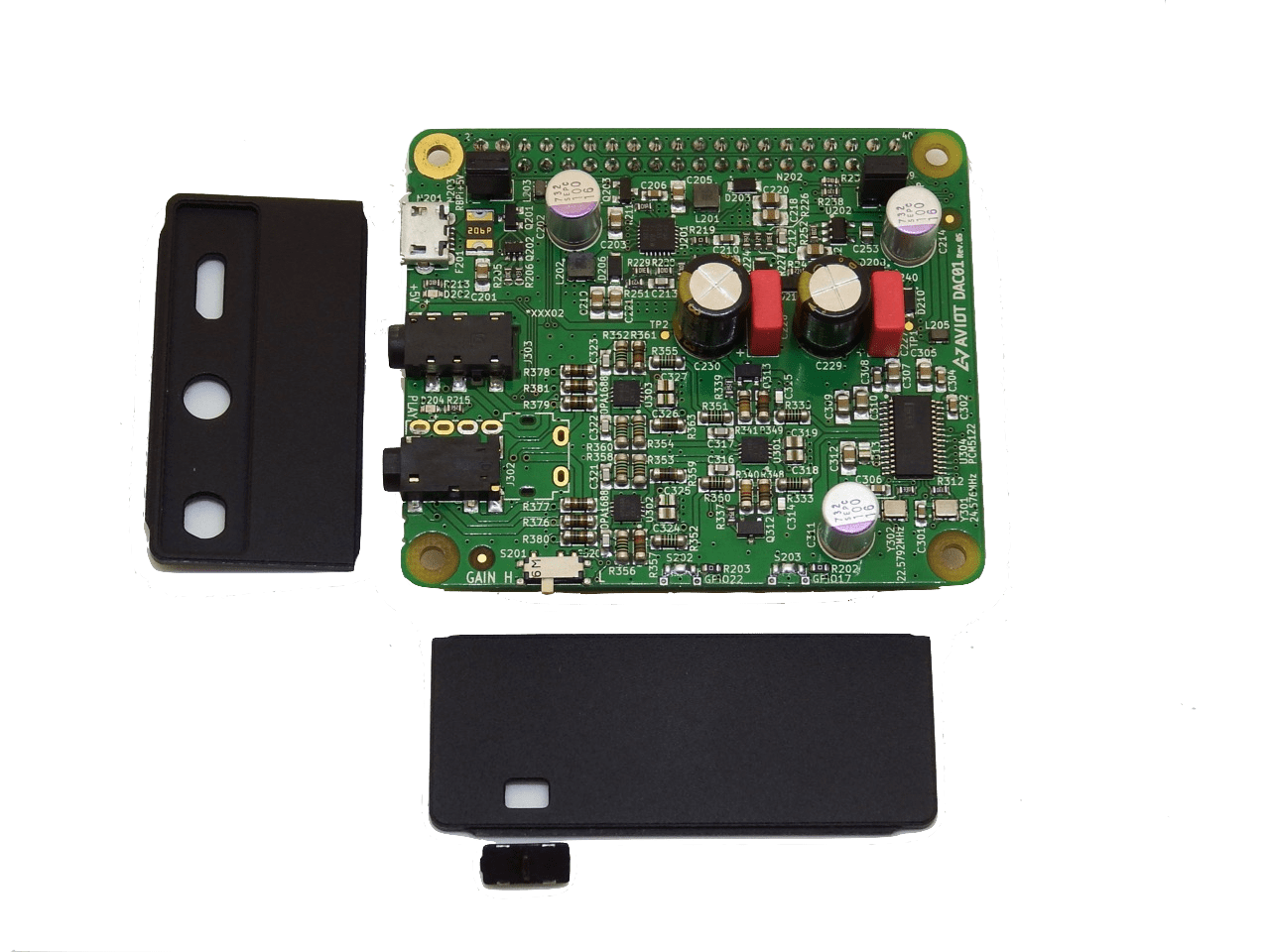 DAC 01 and its exchangeable panels 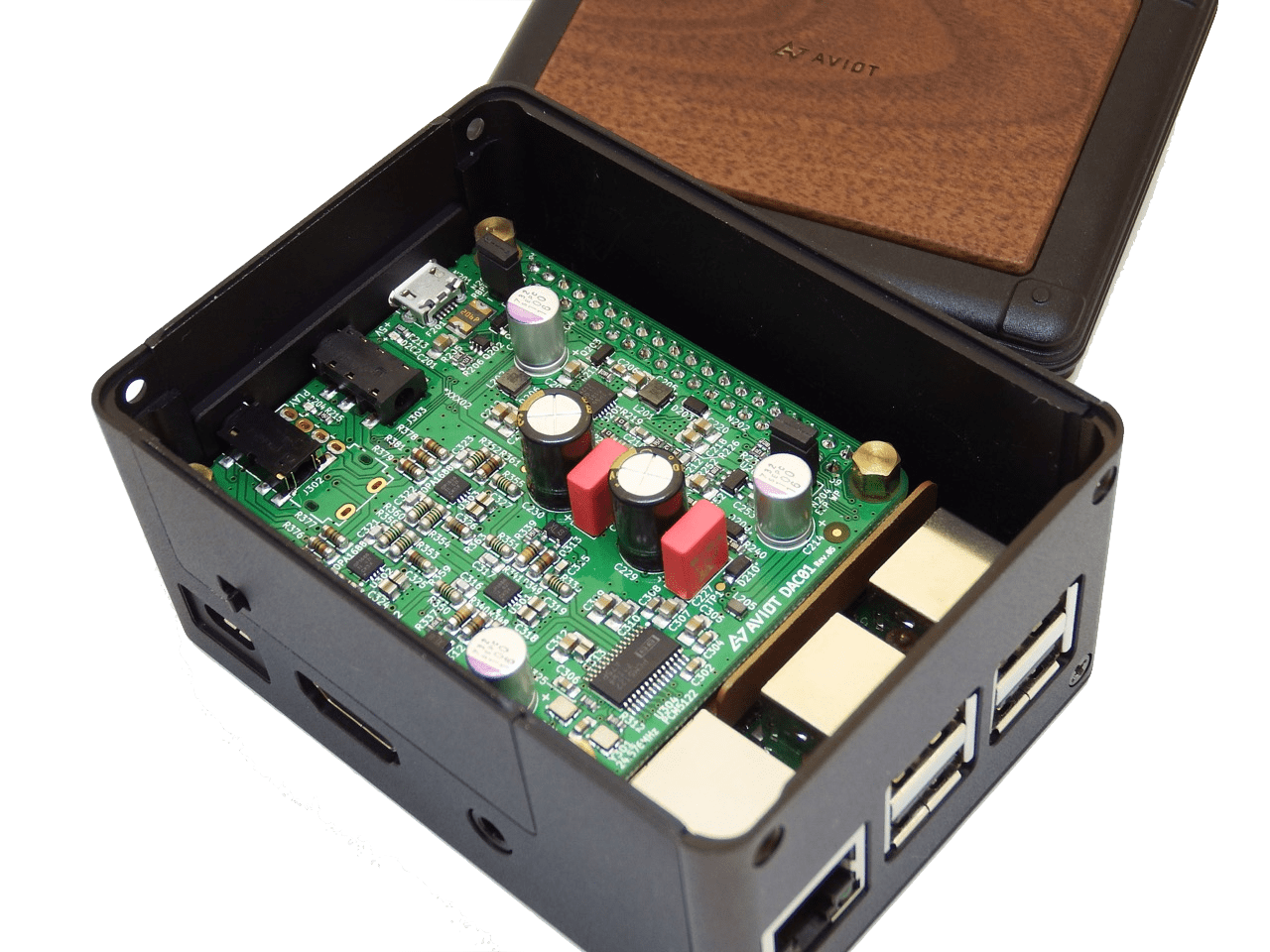 We also take the structure seriously that could install a 1.5mm thick copper plate between Raspberry Pi and HATs. Raspberry Pi 3 has onboard wireless module (Wi-Fi / Bluetooth enabled), which is a noise source and should be avoided in audio design, but should not be invalidated easily. Because it is necessary to communicate with a smartphone or tablet for songs operation. It is the reason for preparing the copper plate to suppress the influence of electromagnetic noise generated on the board as much as possible.

Front / side exchangeable panel can fix without screwing it. The reason why we did not adopt screw fastening design is that some HATs laid out PINs its width limit. In order to prevent vibration, it is necessary to designate the structure of portion where exchangeable panels and the bathtub are in contact with precision of less than millimeter, and we did so. Finding a factory with its manufacturing capability was a rather difficult task. 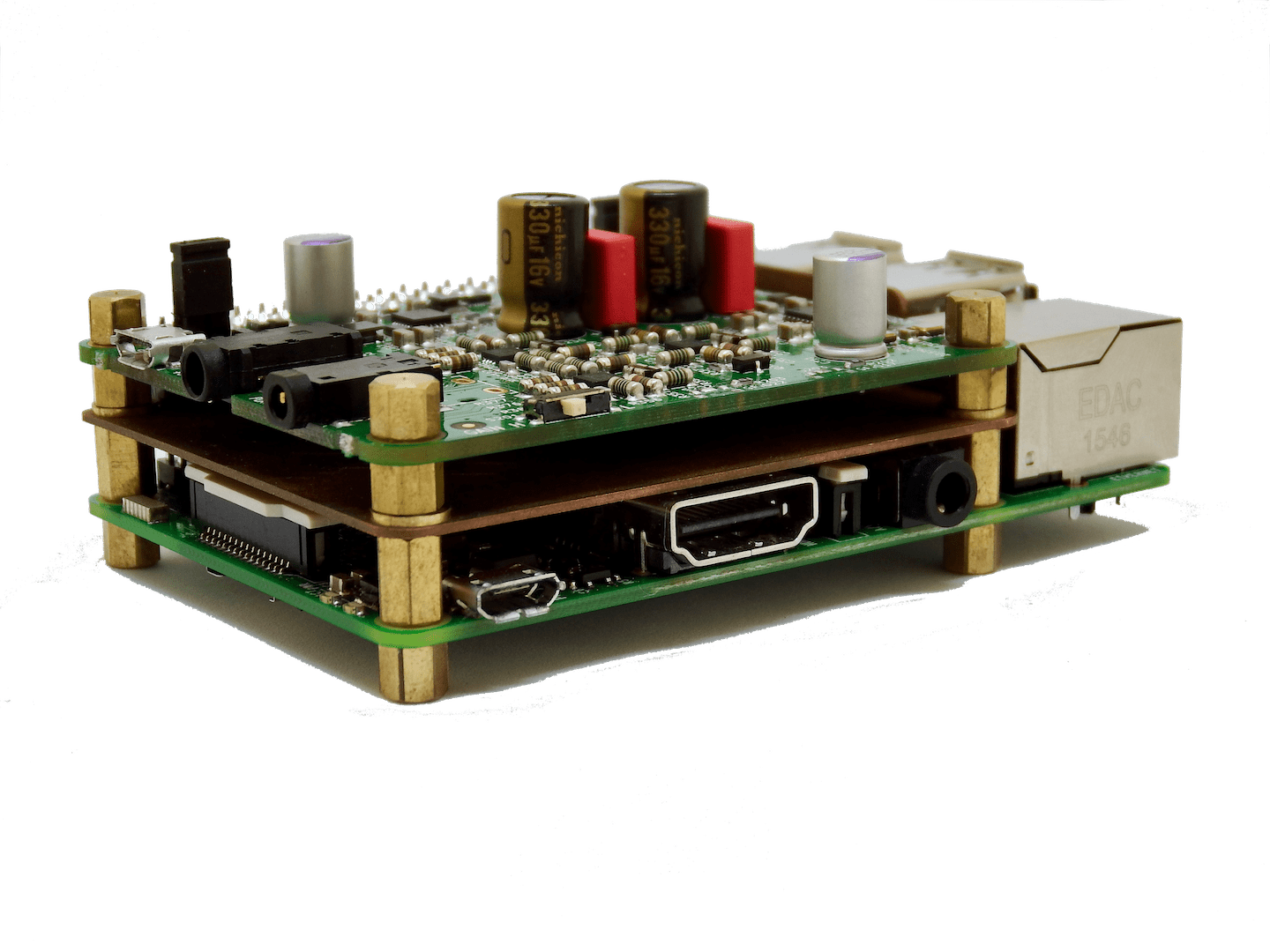 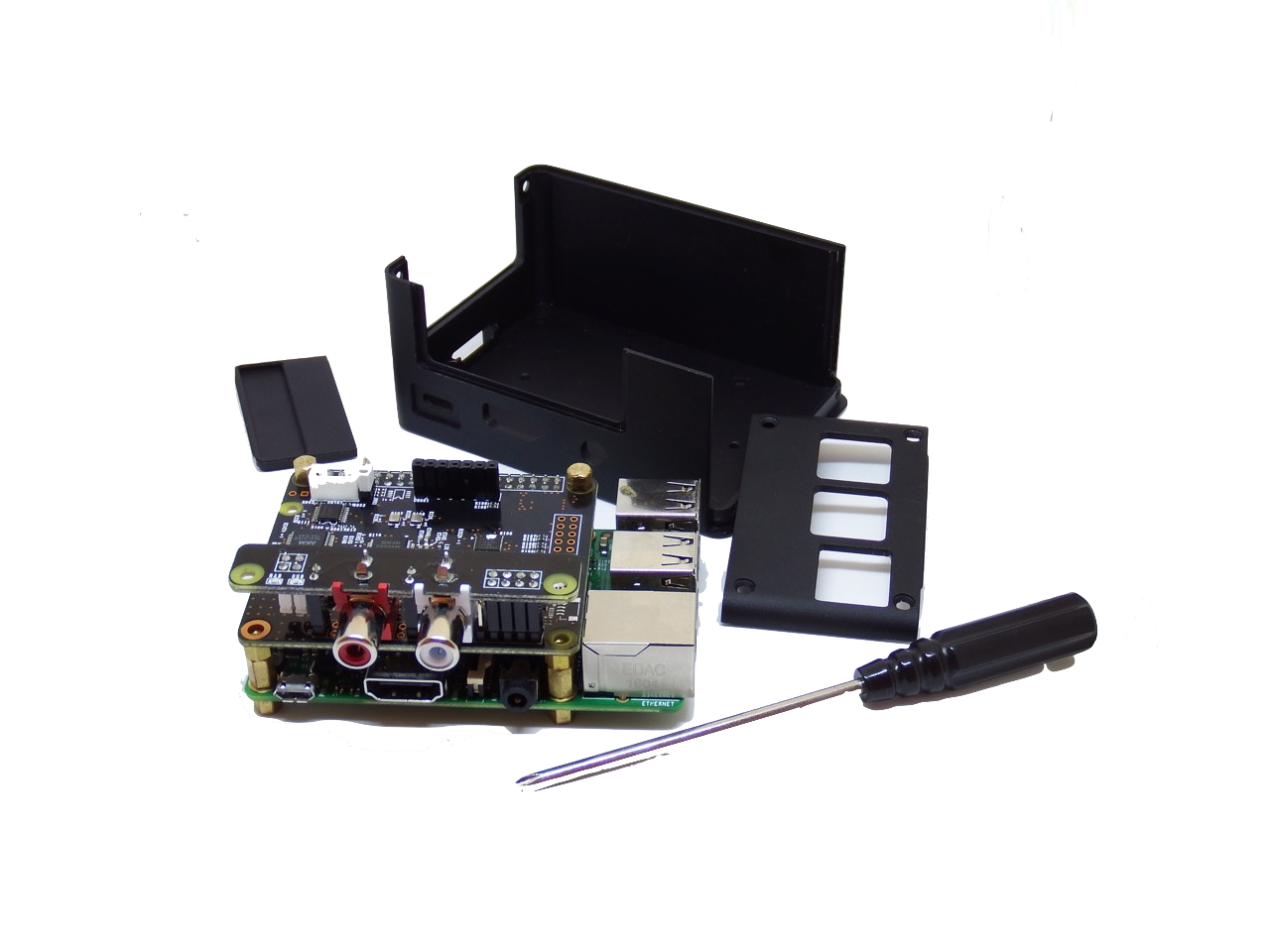 The exchangeable panel which is on sale as of June 2018 is HiFiBerry DDC board “HiFiBerry DIGI+ (Standard / Transformer / Pro)”, Japanese Brightone DAC board “Terra Berry 2+”, Takazine’s DAC board “SabreBerry 32”. Except for the panel for DAC equipped headphone amplifier “DAC 01”, it is included in it.

Please notice not only exchangeable panels but also the design according to the style of audio products. In the bottom of the bathtub, there are two screw holes unrelated to fix Raspberry Pi… Yes, this is for attaching the insulator. When connecting with audio component such as preamplifier by RCA or coaxial digital, using thick and hard cables will float the case, but installing the insulator prevents such a situation.

While retaining the scalability of HATs, CASE 01 achieved sound quality and high rigidity. Once you got it, you can not return to plastic cases. 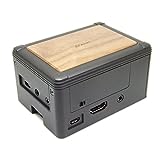